Chimney fires have occurred for as long as there have been chimneys, but there are steps you can take to prevent them. Read on to find out more... 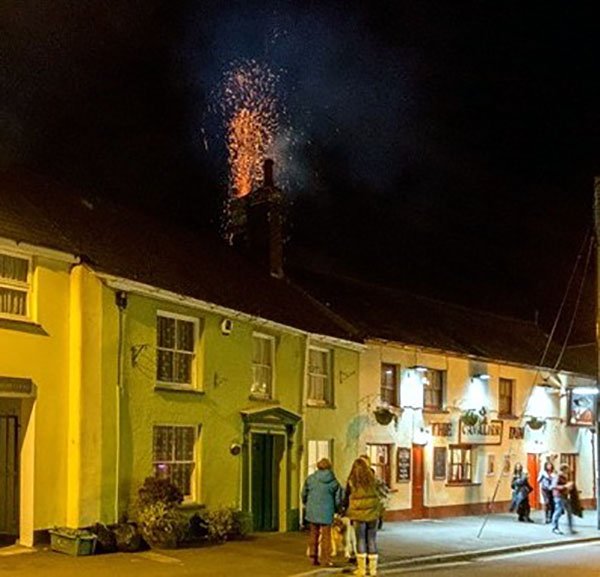 What causes a chimney fire?

Chimney fires are typically caused by an accumulation of soot, grease and tar that forms as a result of fuel burning. Regular, professional cleaning of your chimney will not only help improve your chimney’s efficiency but help protect against a chimney fire and harmful gas emissions such as carbon monoxide. Clean fuel will also help and burning hot fires tends to use up the fuel and produce less residue, particularly if the flue gets hot enough to allow the exhaust to exit the flue before cooling and condensing in the flue.

How do I know if I have a chimney fire?

Chimney fires can burn explosively and are generally noisy and dramatic enough to be detected by neighbours or people outside. Victims of them compare the sound of the fire to a low rumbling noise like a train or low-flying airplane. Flames have been known to shoot from the top of the chimney accompanied by dense smoke. The first indication of a chimney fire is usually the noise (a roaring sound) that grows louder as the fire intensifies, reaching temperatures of up to 1200 degrees C. Chimney fires can have flames and sparks that shoot a few meters from the pot or top of the chimney.
Not all chimney fires are dramatic, some chimney fires that lack air (oxygen), heat or fuel, can still cause issues, and can still burn at high temperatures, and should combustible materials be near the chimney (in the loft for example) they can ignite. 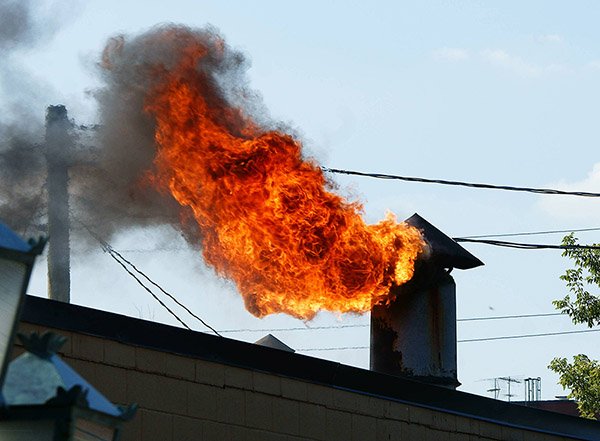 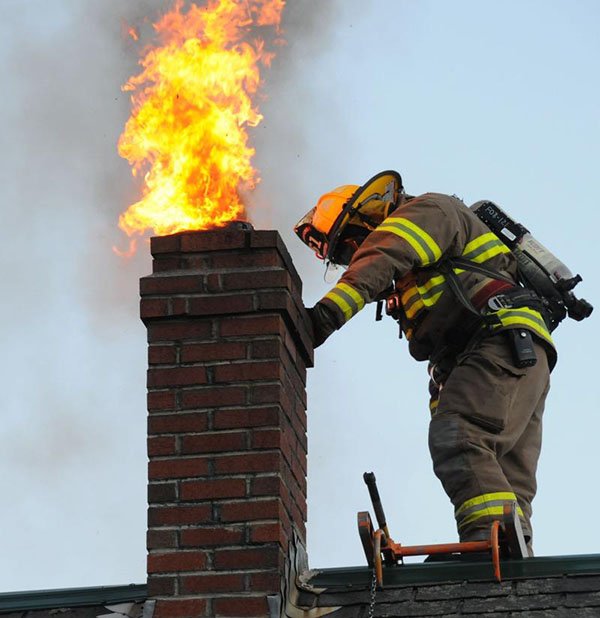 What to do in the event of a chimney fire

Stay calm and call the fire service
Make everyone in the home aware of the fire and the necessity to leave the house quickly should things escalate.
If you have a thatched property, leave the premises with your pets (if any) and wait for the fire services.
Extinguish the fire using sand, a CO2 or foam fire extinguisher, alternatively gently splash small amounts of water onto the fire
Do not be tempted to throw a bucket of water on the fire, as this will just make a large mess and the resulting steam could thermally shock your stove/flue
Never throw salt onto the fire as this will produce Chloride gas which is toxic
Close all air vents and dampers (stoves only) as starving the fire of oxygen will lessen the ferocity of the chimney fire
If you need to leave the property for your safety, do not be tempted to salvage belongings, time is of the essence

What to do after a chimney fire?

Call Certified Sweeps and arrange for a sweep and inspection of the flue.
Inform your sweep that you have had a chimney fire
A CCTV examination of your chimney will be a necessity, this will ensure your flue is safe to use again, and if it is not, the footage will be used for any insurance claim
Photograph evidence of the fire carefully
Your sweep is here to help you and give you the right information to ensure your safety
Never carry out repairs until you are advised you can do so
If the flue needs repair specialist services will need to deal with this to ensure that the flue is repaired to current building regulations.

The Benefits of using Certified Sweeps Are Clear

You can trust Certified Sweeps’ all Ireland network of professional chimney sweeps to help protect your home and family from chimney fire. Use our find a sweep section on this website to find your nearest certified sweep. 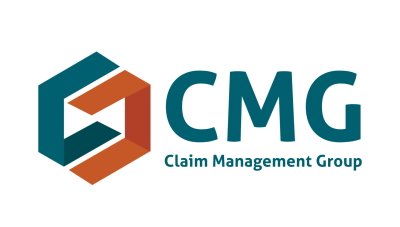 A cracked chimney flue is an emergency!

When conducting a chimney inspection, your Certified Sweep will also examine your chimney flue for cracks, breaches and other issues that compromise its ability to function safely and efficiently. A crack in a chimney flue and deterioration of the chimney liner can expose other parts of the property to the very hot temperatures in the chimney and cause those materials to combust. If a crack has been identified in your chimney flue, you should never use your fireplace or stove until the crack is repaired by a certified professional, no matter how small the breach or fracture.
The team at CMG has dealt with all types of fire damage claims and can help you compile, submit and negotiate your claim to achieve a satisfactory settlement. Contact them here today to find out more. 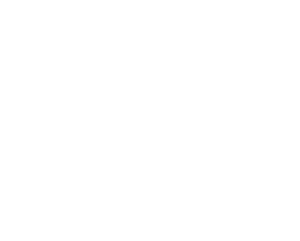